Real estate investment companies and affordable housing NGOs in the U.S and overseas are increasingly joiningthe “low impact” housing movement and latching on to the distributed renewable energy “locomotive.” In doing so, they may well wind up enhancing their “green” credibility and bottom lines while at the same time contribute to the global drive to reduce greenhouse gas (GHG) emissions, ecosystems and natural resource degradation, and offer affordable housing in line with UN Sustainable Development Goals (SDGs). 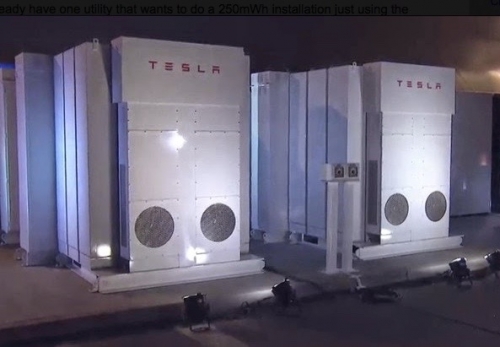 In addition, advanced lithium-ion battery (LiB) energy storage capacity should provide 11 megawatt-hours (MWh) of rapid, automated demand response and enable KRC to reduce energy consumption and costs, as well as help SCE keep the local utility distribution grid operating smoothly. KRC already has a demand response program with SCE up and running, one that has earned it industry accolades, and it doesn’t expect the new DR program to have any impact on building operations or tenants.

AMS will design, install and operate advanced energy management systems with a combined total 11-MWh of energy storage capacity at class A commercial office buildings KRC owns in El Segundo, Long Beach and Irvine. Each is to range in size from 1500 kWh to 3000 kWh each, continuously optimize energy resources and automatically control costs by shifting energy resources among the LiBs based on price and demand response signals from SCE.

In sum, “The utility will be able to tap into KRC’s Hybrid Electric Building® fleet to reduce demand on the grid as part of a groundbreaking plan to build a smarter, more resilient electric grid,” management highlights. 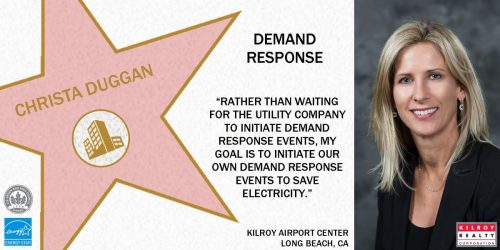 “We pride ourselves in offering our tenants work environments that lead the world in innovation, efficiency and sustainability,” KRC SVP, Sustainability Sara Neff said in a press statement. “Equipping our buildings with the most advanced energy management systems allows us to be part of the solution to today’s biggest energy challenges while maintaining world-class services to our tenants and guests.”

Across the “pond” from the U.S. east coast in Scotland, affordable housing and community development NGO BHA began considering tapping into Scotland’s growing wind power capacity in 2009 when it found its survival threatened by elimination of key government affordable housing legislation and related budget cutbacks, The Guardian’s Peter Hetherington reports.

Finding a partner in CES, BHA set out to craft and realize a plan to erect three wind turbines on a North Sea Berwickshire County headland as a means of shoring up its ability to realize its own main goal of providing modern, affordable housing across a 650-square mile rural county with some 20,000 residents. 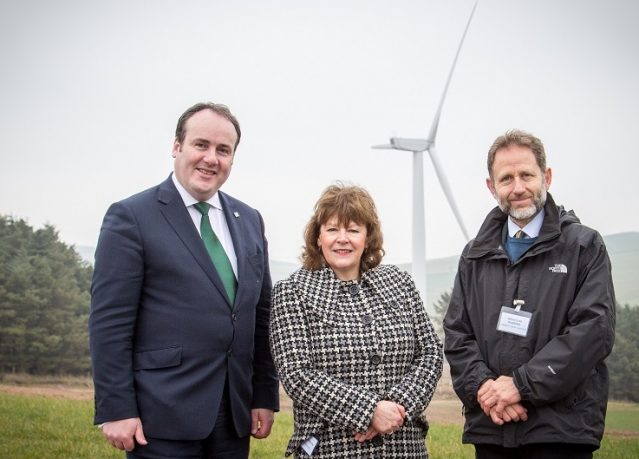 In contrast to the UK central government, Scottish legislators in Edinburgh have by and large continued to support, and increase budgets for, social and affordable housing, The Guardian’s Hetherington notes. The current target calls for construction of 50,000 affordable homes by 2020-21, 30,000 of them for so-called “social renting.” The initiatives are part and parcel of a ₤3 billion (US$3.85 billion) the Scots government’s affordable housing investment program.

“What is happening in England is terrible…the idea that you cannot have a secure home. We have a lot of tenants working very hard, sometimes with two to three jobs, finding it difficult to get by…and they deserve a house,” BHA chief executive Helen Forsyth was quoted as saying.

“These people are working hard delivering the services we all need and they shouldn’t be made to feel lesser mortals because they cannot afford to buy a house.”

That’s a refrain that has been heard with increasing frequency and political resonance in the U.S. and industrialized countries over the past decade and more, as more and more people find they cannot afford homes or make ends meet even when they have full-time jobs. Statistics on US wealth and income distribution provide stark illustrations of the increasing concentration of income and wealth in the U.S., which have reached historic proportions.

Some of the income generated by the Hoprigshiels wind farm is earmarked to fund similar community wind power affordable housing plans in Scotland.

All in all, it’s a “groundbreaking initiative” that’s being “hailed as a breakthrough in a distinctly different political climate from that in England,” Hetherington writes.

“What is happening here is a ‘first’ – relieving housing pressure by harnessing the wind for the benefit of everyone,” Scotland Energy Minister Paul Wheelhouse said.

In fitting fashion, Wheelhouse “christened” the wind farm by smashing a bottle of whisky against the base of one of the wind turbines.

“This just shows what can be achieved if communities are involved in the process from the beginning,” he continued. “The terms of the debate change from a wind farm being seen as doing something to people to an enterprise doing something for people.”

Forsyth took the opportunity to put the Italian language skills she’s been acquiring in night classes to use. Celebrating the occasion of the wind farm’s inauguration in a public ceremony, she called it “le pale eoliche,” explaining that it means “the blades of the god of the wind,” in Italian. “I am really proud of what we have all achieved. It has been an epic adventure,” she added.