Renewable Energy Integration with Mini/Microgrid: A novel use of the hybrid energy storage system for primary frequency control in a microgrid

High penetration of renewable energy causes fluctuations of power flow and results in system frequency fluctuation, which significantly affects the power system operation. The situation in microgrid (MG) is worse because of the low inertia and small time constant of the system. This paper present a novel use of the superconducting magnetic energy storage (SMES) and battery hybrid energy storage system with the function of frequency control in the MG. A hybrid power management strategy for the SMES and the battery is used to achieve, firstly, a faster primary frequency control and secondly, an improvement of battery service time.

Microgrid is defined as a low voltage power system which has a cluster of loads and generators and is able to provide electricity to its local area [1]. The distribution generations using renewable recourse can be integrated into a microgrid efficiently [2]. However, due to variable nature of renewable sources and fluctuating load profiles, the power supply in the MG sometimes cannot match the load demand. The unbalance between generation and load will result in system frequency fluctuation and the situation in MG is worse because of the low inertia and small time constant of the system [3]. Therefore, frequency control is a critical in the island MG.

Battery energy storage systems which have high efficiency and large energy density [4] are believed as effective solution for power balancing in an island MG. Many works have been done to study batteries using in off-grid MG: shave peak demand and store the surplus renewable energy in [5, 6], improve power quality [5] and frequency control [3, 7]. However, the limited service lifetime and the relative low power density are mainly two disadvantages that limit the usage of battery [8, 9]. 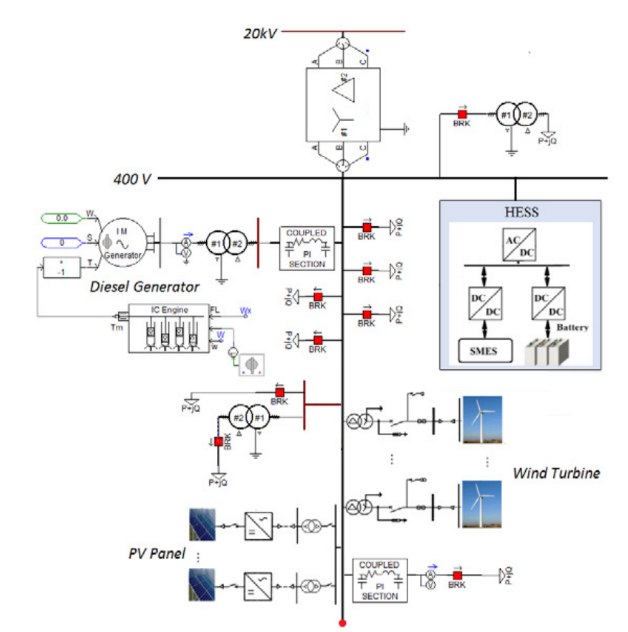 A dynamic MG system based on the benchmark system [13] with renewable powers and the SMES/battery HESS has been established in the PSCAD/EMTDC software. The single line topology of the MG is shown in Fig. 1. A 400V distribution system connects to a 20 kV final station via the transformer. The battery and SMES HESS is interfaced with the 400 V bus by the AC/DC converter. The SMES and battery are modelled and sized using the methods described in [11, 14]. The diesel generator (DG) with rated voltage of 400 V is build based on the IEEE standard AC1A. The wind turbine (24 kW) and the solar panel (15 kW) in this study are modelled based on the previous work described in [3].

As shown in Fig. 2, the SMES/battery HESS is introduced in the proposed MG with the function of primary frequency control. The dispatchable micro-sources offer the active power sharing based on the droop mechanism. Eq. (1) is used to illustrate the frequency control of the MG following a disturbance, where Ci is the inertia constant for i system. 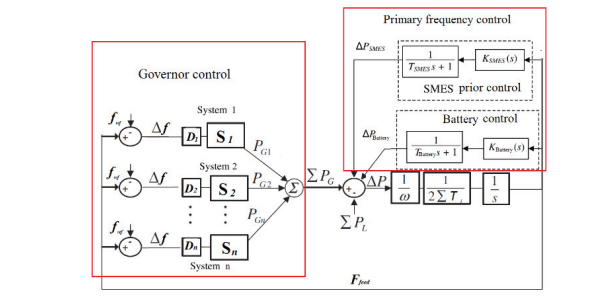 Due to the fast dynamic response performs of the HESS, the power disturbance will be firstly compensated by the energy storage. In addition, the charge/discharge speed of the SMES is much quicker than that of the battery.

Since the response of the HESS are extremely faster than that of the governors, the dynamics of the micro-sources can be are neglected in the power management design of the primary frequency control.

Several precious studies [10, 15] have proposed the control strategies of hybrid energy storage system used in renewable power or electric vehicles. Li et al. [8] introduced an overall power control algorithm used in a wind application with HESS. In this method, the power delt by battery is controlled at a low frequency. As an improvement of the previous method, this paper proposes a new design of overall control strategy 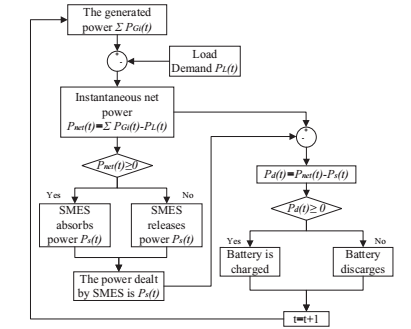 As shown in Fig. 3, given the varying load power requirement, the instantaneous net power can be obtained.

The effects of the proposed SMES/battery HESS working as the frequency stabilizers in the MG system are shown in Fig. 4. The same random load changes as shown in the Fig. 4(a) are applied in three scenarios: the conventional MG (without any energy storage systems), the MG with only battery and the MG with the SMES/battery HESS. Fig. 4(b) shows the simulation results of the frequency oscillations in the proposed three cases. It is obvious that the frequency oscillations in the conventional MG are much more server than those in the other two cases. Also, the frequency fluctuations are significantly suppressed in in the MG with HESS than that of the battery only system. The peak oscillation value in the HESS is also much smaller than the other two systems.

Therefore, the proposed SMES/battery HESS is able to perform a better system frequency control than the battery only system and conventional MG system.

The proposed HESS with the frequency control of the MG system is able to improve battery lifetime in two means. Firstly, the SMES deals with the shot-term quick power fluctuations hence, the battery experiences less cycles. Secondly, with the help of the SMES, the battery power requirement for battery is less resulting the lighter depth of discharge. A battery lifetime prediction model [8] which is capable of calculating these two factors on the battery degradation process is used in this paper for battery lifetime extension analysis.

It is beyond the scope of this paper to introduce this model in detail. Based on this model, battery only system and the HESS. The input is the battery state of charge data and it returns the cycle numbers at different depth of discharges. As it can be seen from the histograms the battery undergoes extensively fewer small-scale cycles and also a relatively lighter depth of discharges. Based on this model, the battery lifetime is predicted as 5.7 years in the battery only system whereas 9.2 years in the HESS resulting in a 61% extension of battery lifetime.

This paper proposed a battery and SMES hybrid energy system used in a MG system with the frequency control function. The frequency control method and power management strategy are introduced in this study achieving an efficient use of the SMES. The performance of the HESS is tested based on the MG system developed in the PSCARD. The simulation results show that, compere with the conventional MG and the battery only MG, the MG with the HESS performers a better frequency stabilization. Another advantage of the proposed HESS is that the battery is protected from the high frequency charge/discharge cycles and peak currents, which improves the battery service life. The extension of battery lifetime is quantitatively increased from 5.7 years in battery only system to 9.2 years in the HESS.

[10] Ise T, Kita M, Taguchi A. A hybrid energy storage with a SMES and secondary battery. IEEE Transactions on Applied

Energy Storage Blockchain 'Like Early Days of the Internet"