Processing transactions in automated, real-time fashion based on parameters agreed to by peers operating one or more nodes in an energy blockchain could unlock massive savings by eliminating the time and money being spent to produce, transport, trade, process, reconcile and store transactions within organizations, between organizations as counterparties to a transaction or by channeling them through centralized exchanges and clearinghouses, according to BTL. Furthermore, the immutability and tamper-proof nature of blockchain transaction databases would save untold, but very large, sums of money lost to cyber-fraud and other forms of computerized crime, as well as the systemic risk posed by simple data input errors, the domino effects of which have wrought havoc on financial markets.

In addition, energy industry players are ramping up their investments in wireless sensors, networks and automated, network-enabled electronics devices and equipment, such as unmanned aerial vehicles (drones), so as to monitor, manage and maintain far-flung physical assets remotely in greater detail and more comprehensively, in real, or near real-time. Fully realizing the prospective rewards held out by energy blockchain platforms lies in deploying them in tandem with the fast-emerging “Energy internet of Things,” BTL says.

Blockchain in the Oil & Gas Industry

Focusing on development of blockchain-based solutions in the finance, energy and gaming sectors, BTL’s Interbit platform is based on a proprietary, blockchain-based distributed database, transaction and ledger platform that also makes use of automated “smart” contracts. It is among the first to be marketed widely as an industrial-strength platform robust and secure enough for use by enterprise-scale corporations.

BTL zooms in on the advantages and benefits implementing energy blockchain solutions could convey for natural gas industry participants in its white paper, which might not come as a surprise. Back in February, BTL announced it had joined with Wien Energie to build, test and prove a pilot-scale version of an Interbit energy blockchain trading platform.

Wien Energie provides natural gas and electricity services to some 1.2 million private customers 230,000 businesses and 4,500 farms in the Greater Vienna metropolitan area. Launched in March, BTL and Wien’s Interbit pilot test is more than halfway through completion, BTL notes in its white paper.

Greatly enhanced cyber-security is inherent in blockchain’s distributed computing architecture, via which streams of transaction data and associated messages and documentation can be immediately authenticated and verified peer-to-peer instantaneously using the consensus-based processes embedded in blockchain smart contracts and applications. These streamline data and communications throughout the value chain, replacing the numerous third-party intermediaries — brokers, trading platforms, centralized exchanges, and industry clearinghouses — that constitute today’s digital wholesale markets, as well as the communications channels and software applications industry participants employ in-house, according to BTL.

In 2016, the U.S. Federal Bureau of Investigation (FBI) issued a bulletin warning corporations of a sharp rise in so-called business email compromise (BEC) cyber-threats. According to BTL’s white paper, the FBI reported businesses worldwide had either lost or been subject to $3.1 billion worth of EBC threats since 2013. Moreover, the oil and gas industry apparently is a favorite target for, and is particularly vulnerable to, cyber-attacks given the scope and complexity of the industry and market value chain.

“Blockchain’s immutable record and consensus mechanism work to avert this type of threat. If vigilance fails when a compromised invoice arrives, and a transaction is initiated, it would be flagged as invalid as soon as it was broadcast to the network,” according to BTL. 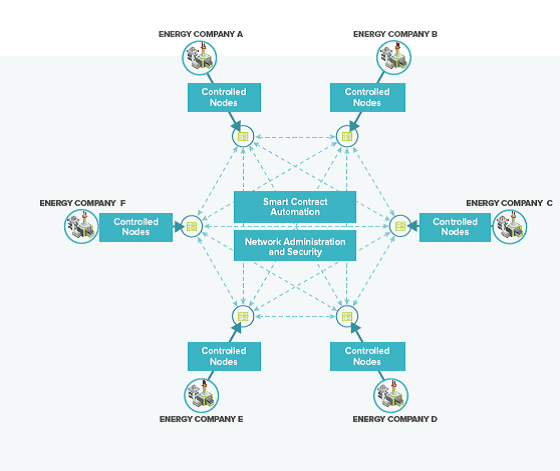 “A lapse in diligence upon payment data entry would not be punished by a loss to cybercriminals. The account discrepancy would be immediately apparent to all members on the blockchain, and an audit would uncover the attempted fraud. In all manner of transactions, it is this immutability and consensus that protects against compromise.”

Amidst the rapid evolution and emergence of the energy and industrial Internet of Things, what’s known as “boundary protection” has emerged as the single, greatest vulnerability of network-connected industrial control systems. The U.S Dept. of Homeland Security has ranked boundary protection at the top of their list on industrial control systems’ cyber-threat weaknesses for two years running, BTL points out. As the company explains:

“Boundary protection refers to the measures taken at the enterprise information perimeter to protect internal data and assets. The perimeter includes work devices that access the Internet and sensors that sit outside a company’s physical domain, but connect with an internal network.”

Boundary protection measures are used extensively “upstream” along the oil and gas supply chain in particular – at exploration and production sites and along transmission and distribution (T&D) pipelines, BTL notes.

The vulnerability of these core energy supply chain assets and information streams to cyber-threats is going to multiply as oil and gas companies upscale deployments of wireless sensors and distributed energy Internet of Things networks, BTL cautions.

“From a security perspective, the proliferation of connected endpoints, often outside an organization’s physical domain, increase exposure to tampering or entry by malicious actors, an event that has become unfortunately familiar,” BTL highlights.

Blockchain’s distributed computing and communications systems architecture greatly reduces the vulnerability of a hijacked device being used in an attempt to defraud and steal funds or bring an electronic trading/transaction platform crashing down, BTL says. “If any device on the network is compromised, the immutability of the blockchain record protects historical information from being changed, and the nature of the decentralized consensus mechanism means that the device cannot successfully execute rogue transactions,” according to the white paper.

As substantial as the security benefits are, blockchain applications in the oil and gas industry hold out prospects of other multiple billion-dollar streams of savings by automating and distributing trading, transaction processing, administration and accounting across authorized peers in a network platform. That’s a topic Microgrid Media will cover in part two of this series.