Maintaining a balance on the electric grid used to be simple for utilities, just follow demand with turbine generators.  The electric utilities had a monopoly on generation and were incentivized to build plenty of infrastructure, so there was more than enough dispatchable capacity to go around.   Life was good.

Most desalination plants were designed to exist in that world.  They consume so much constant energy that some have predicted a nuclear renaissance.

The almost-complete Carlsbad desalination plant being built by Poseidon will draw a constant 38MW from San Diego Gas and Electric (SDG&E) when it goes online.  An electric grid dominated by fossil fuel generators loves that kind of flat, industrial load.

But the one-way flow of electrons from turbine to toaster is already over.  Electricity can now be generated anywhere, and most new capacity is coming from Variable Renewable Energy (VRE) sources such as solar PV and wind turbines.  The output of VREs is not controlled by humans, and can fluctuate wildly.

As a result, maintaining the balance is becoming more difficult for grid operators by the day. Grid operators are concerned that if they don’t get ahead of these trends, they will get buried by them. On October 7th, California adopted a requirement to generate half of its electricity from renewable sources by 2030, and no one knows exactly where the required flexibility will come from.

While 50% renewables is certainly obtainable (Hawaii is shooting for 100% by 2045), reaching these penetration levels of renewable energy requires societal acceptance that time is money. 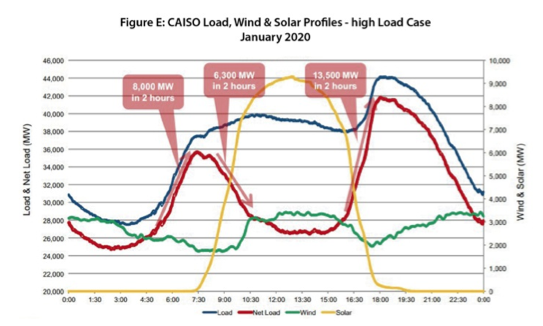 The red line above shows the extreme ramps that California’s grid operators are up against. The increased ramps need to be met with flexible resources, currently consisting of mostly gas-fired power plants that run only a few hours each day. Notably, this slide was created before the 50% renewable target and the ramps were already sharpening faster than anticipated.

In a free-market, the imbalance of supply and demand create exponential price swings.  Wholesale energy prices can even become negative when periods of high VRE generation coincide with low demand.  In coming years, the volatility of wholesale energy prices will continue to intensify as more solar PV and wind capacity is added. 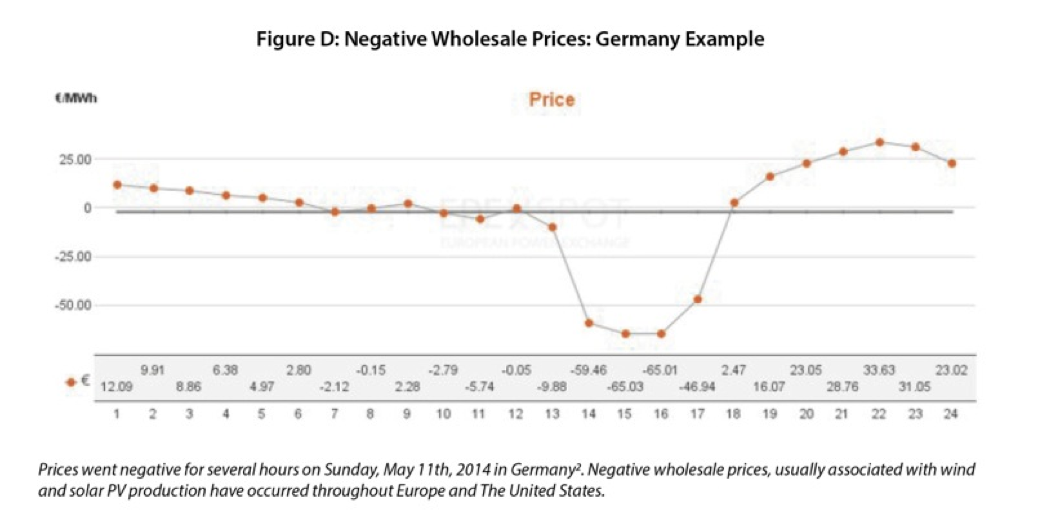 An alternative approach to following ramps with generators is to use strong market signals at the retail or wholesale level to actively shape the demand curve.  This approach facilitates much higher levels of solar and wind energy.  Ignoring the impact of supply and demand will translate to a more expensive, wasteful system for everyone.

SDG&E is one of the most progressive-thinking utilities about bringing high levels of renewable energy onto the grid.  At ESNA 2015, the always quotable Senior VP James Avery explained they don’t have a choice.  Regarding the interconnections in San Diego, “we are located at the end of the world,” said Avery, referring to the Pacific Ocean to the West, Desert to the East, and the Mexican Border to the South.

If you’re not prepared for the change, it’s too late.

SDG&E knows that time is money.  They have embraced the change to distributed energy, and are piloting programs to shift customer demand.  They seem to be hoping that the desalination plant will be able to curtail energy.

But Poseidon insists they will operate 24/7 and without participating in demand response markets.  More inflexible desalination plants like Carlsbad could make the transition to clean energy more expensive for everyone.

Large industrial energy users often participate in solar or wind projects to either offset their energy costs or offset their carbon footprint.  This is reasonable when the grid can absorb the increased generation.

A large capacity battery bank could mitigate the timing problem, but at an exorbitant cost.

Poseidon, who designed the desalination plant, holds no exposure to electricity rates according to the agreement between the San Diego County Water Authority (SDCWA) and Poseidon.  All risks associated with electricity rates were taken by SDCWA.

There is no power purchase agreement with SDG&E, “we pay per the applicable tariff structure for industrial facilities,” admitted a Poseidon Community Outreach Manager.  The Carlsbad plant may or may not become an energy fiasco, but there is a cost to inflexible energy consumption.  The externalities will be hidden in water bills, energy bills, increased taxes, and perhaps increased carbon immersions.

Most of the desalination plants being proposed in California won’t come online for over 10 years, as California approaches 50% renewable energy it is unlikely that anyone will have flat electricity rates.  Desalination plants can be designed to absorb the fluctuations of VREs, and participate in demand response markets.

Desalination plants can be built with a flexible energy demand using a modular approach that helps the electric grid absorb VREs.  While they use the same basic technology (Reverse Osmosis), modular desalination plants are fundamentally different and cannot be retrofitted from existing plants.  The approach used by Sisyan uses DC power and variable frequency drives (VFDs) to use solar, wind, and battery-stored energy without inverters.

Elemental Water Makers have a renewable desalination approach that involves pumping water uphill during solar hours and using gravity to provide the pressure necessary for Reverse Osmosis Desalination. They have pilot operations in the British Virgin Islands.  Though their approach requires elevation, it could be done in several locations on the California coast.

Since this article was published, Department of Energy hosted a workshop called Energy Optimized Desalination technology Development Workshop in San Francisco.  To the 100+ attendees, California Energy Commission (CEC) executive Director Rob Oglesby made a plea to the desalination industry to acknowledge the duck curve that threatens grid stability in California.  He warned that if the majority of the plants already being proposed in the state are built, it would impact the states energy supply.  He suggested ways of pairing solar, wind, and other renewable energy with desalination plants.